China Minzhong - not another Scandal?

This must be the most disastrous "anniversary" for China Minzhong ("CMZ") shareholders with the Company scheduled to announce its results for on 29 Aug 2013 before trading hours.

I wrote this piece of article about one year ago on 28 Aug 2012 - China Minzhong - the analysts don't get it when share price dropped dramatically after its Q4 results and this time around, another "Carson Block" type of firm called Glaucus Research Group is out to "finish" China Minzhong once and for all with a target price of zero!

The report is here. It is a very depressing read and contain several allegations which you should read it even if you are not a shareholder.

It will be interesting to see how the Board of Directors react to the allegations mentioned, especially the non-executive members. At the time of my writing, they are probably in deep discussions with external counsel, auditors and management. Based on the annual report in 2012, the non-executive board members in the hot seat consist of the following members:
I highlight the two more prominent non-independent directors below. 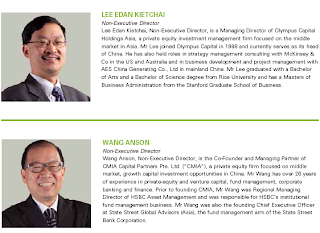 Edan Lee and Anson Wang are deemed to be non-independent because their funds hold a huge stake in CMZ. The following table is from last year's annual report.

CMIA Capital Partners first became "famous" because of Ferro China blow up previously. Will it be twice unlucky for them? Somehow, it looks weird when other shareholders hold more shares than the founder.
The auditors Crowe Horwath First Trust LLP must also be feeling the heat now. The audit partner was previously on the board of China Hongxing. It is always a risk to be a board member on S-Chips, especially the Independent directors.

A Company that is always in need of cash?

Sounds so familiar for companies in trouble as they always need capital because they are cash flow negative and can never afford to pay out a dividend. PT Indofood (ticker code: INDF.JK) holds 29.33% of the Company after they subscribed to another 98m shares at $1.12 per share in Feb 2013. The share price of PT Indofood dropped 5.6% versus the 47% drop by CMZ today.

In case you are interested to know if your reserves are safe, GIC fully divested its stake in March this year. 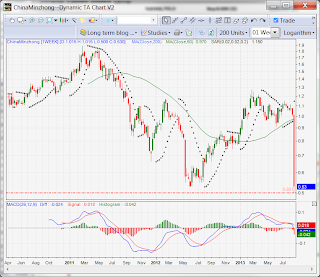 The weekly share price chart looks downright ugly and hit a all-time low today at $0.50. You know my dislike for S-Chips and in a hypothetical situation where i am ever vested, my usual method is to cut loss first (to preserve capital) and think later. I will not average down. Cutting loss is an "competitive edge" which small investors like you and me have but will be more difficult for big funds and shareholders.

Here you go. The list of S Chips that bite the dust and if this one goes as well, frankly, I don't know what other S-Chips you should consider. While i was contemplating a "short sale" on CMZ and Sino Grandnes today. 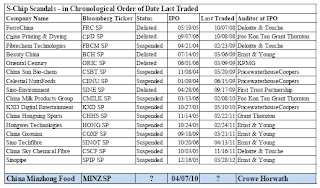 In any case, there are not many options available to the BOD. I outline a few for you.
My view is option 2 is the most likely outcome for the short term and given the track record of Galucus, i think it will eventually lead to outcome 3.

I certainly hope i will not see another scandal (where our hard-earned money are being conned) but history is against us.
Posted by Mr. IPO at 7:26 pm 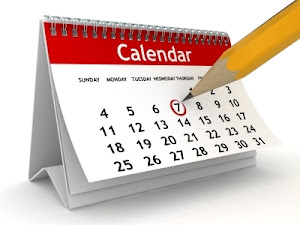